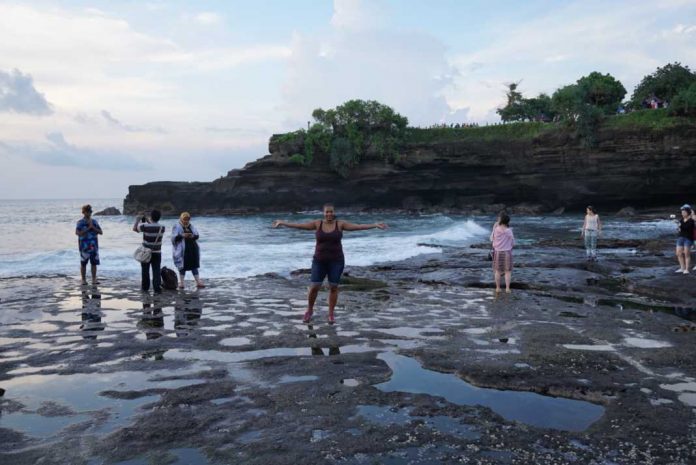 Bali is known as The Island of the Thousand Temples and rightfully so! Here are some of my favorite temples while vacationing in Bali. Check out more of my Balinese experience in this blog post.

Aww, what so many people come to Bali for.

Tanah Lot Temple is synonymous with Bali. After all, the gorgeous water temple with the black lava towers creates an enchanted experience as the most photographed temple in Bali.

Thankfully, the tide was low. I was able to walk out on the rocky islet for an up close and personal experience with this beautiful water temple.

If you can find the prime time to visit, without all the tourists, you’re in luck.

It is crowded! Had to be thousands of faces and prying eyes piercing my skin. Took me a second to figure out why. Then, I realized, we hadn’t see any African Americans in Bali.

Tanah Lot Temple (known as another sunset temple) is oversaturated with tourists. Although this is the case,  you still must take time to visit during your Bali holiday. Sarong is not required.

After watching the sunset, grabbed a bite to eat over at Warung Mandala Tanah Lot for a fresh catch.

Perched 300 meters above the Indian Ocean is the majestic Uluwatu Temple. Built in the 11th-century upon high rock. From this temple, you can see a beautiful Bali sunset surrounded by never-ending ocean. There’s a Balinese dance called Kecak which you can see here too.

Look out for the mischievous long-tailed monkeys who run amuck throughout the temple. Snatching glasses, flip flops, and taking names! I witnessed two assaults on innocent bystanders while walking and singing Bob Marley songs with my lovely tour guide Wayan Sutapa who’s not only an awesome tour guide but has an uplifting and amazing voice!

Watch us jamming to Bob Marley before the monkey strike:

Luckily, the gentleman (guy with the lovely white hair) retrieved his glasses. All thanks to one of the temple guards who chased the monkey with a stick, forcing the glasses from his little hands. The monkey, full of character actually played with the glasses. Had them on his face and all.

Shortly after monkey strike one, another monkey snatched a flip flop right off this woman’s foot as she walked. She didn’t get it back!

Enjoy a day snapping selfies, watching cultural dances, singing in the rain, and simply enjoying the view while waiting on the sunset at Uluwatu Temple. A sarong is required for this temple, located on the south side of Bali.

Taman Ayun Temple, also known as the Royal Mengwi Temple, was the first temple I visited in Bali. Like its namesake, it is a beautiful garden.

Located in the village of Mengwi, Badung and built in the 16th-century, Taman Ayun Temple is comprised of several courtyards and levels.

Most, if not all temples in Bali have courtyards meant to protect the temple and confuse evil spirits that may breach the first protective layer.

In Balinese culture, cosmos are divided into three layers: 1) world of man 2) gods and deities and 3) the most divine/sacred level.

The first courtyard and outer layer is only accessible through a single entrance.

Communal gatherings and cockfights took place at this temple. A memorial to the sacred fight still stands: 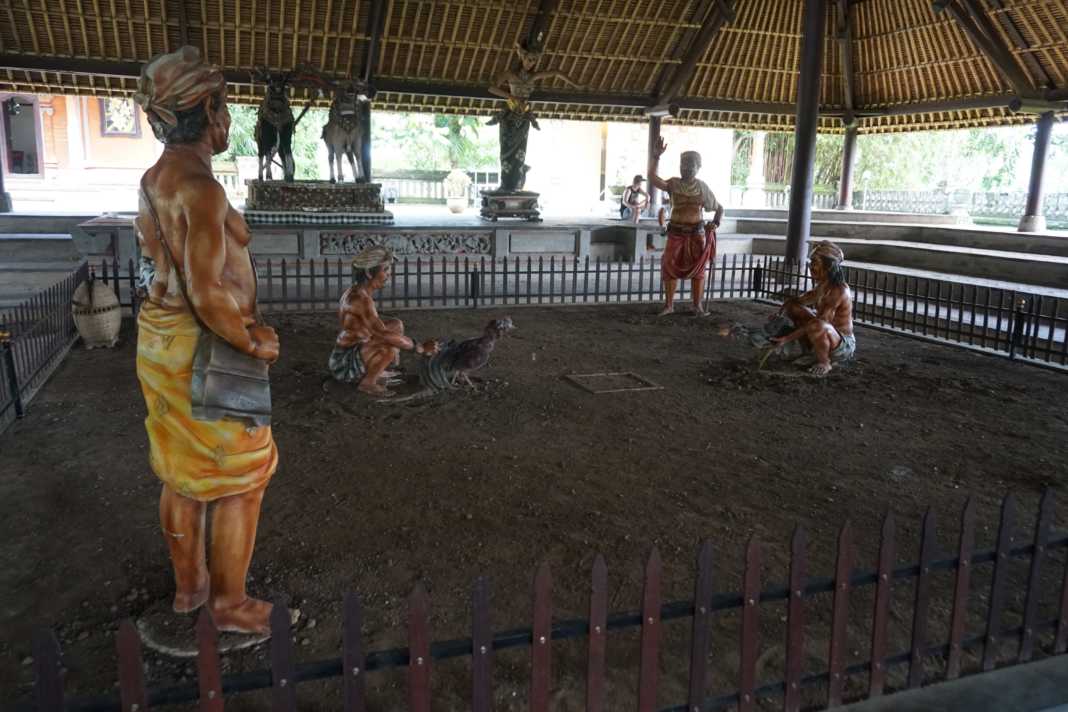 Today, cockfighting is illegal in Bali, but still goes on. I saw many caged birds which is indicative of an upcoming fight. Any time you see caged birds on the side of the road, in front of homes, or on the many scooters in Bali, you know a cockfight is on the horizon. They say placing the birds by the roads helps them acclimate to noise.

Cockfighting started as religious ceremonies where a blood sacrifice was needed. The birds given as offerings to spirits.

When walking around Bali, be careful where you step as you shouldn’t step on the offerings. Offerings on the ground are meant for spirits in hell. Those placed on higher ground, statues, and monuments are for good spirits.

So, the popularity of cockfighting is still evident in Balinese culture. It serves as a form of social networking. There are many complex rules to the fight and betting which you can Google. I just wanted to give you some context to the photo above.

The second and third layers of the temple are a bit elevated from the first as the notion is to ascend to higher levels within the temple before reaching the most sacred level. A guardian protects the gate which is accessible after a short stroll across the pond (see a picture of this in the gallery below).

Offerings given to the guardians are replenished throughout the day. This courtyard also serves as the home of Hindu gods that guard the nine points of the compass.

Take a look at the intricate designed wooden bell towers which overlook the entire complex and are clearly visible before entering the second layer: 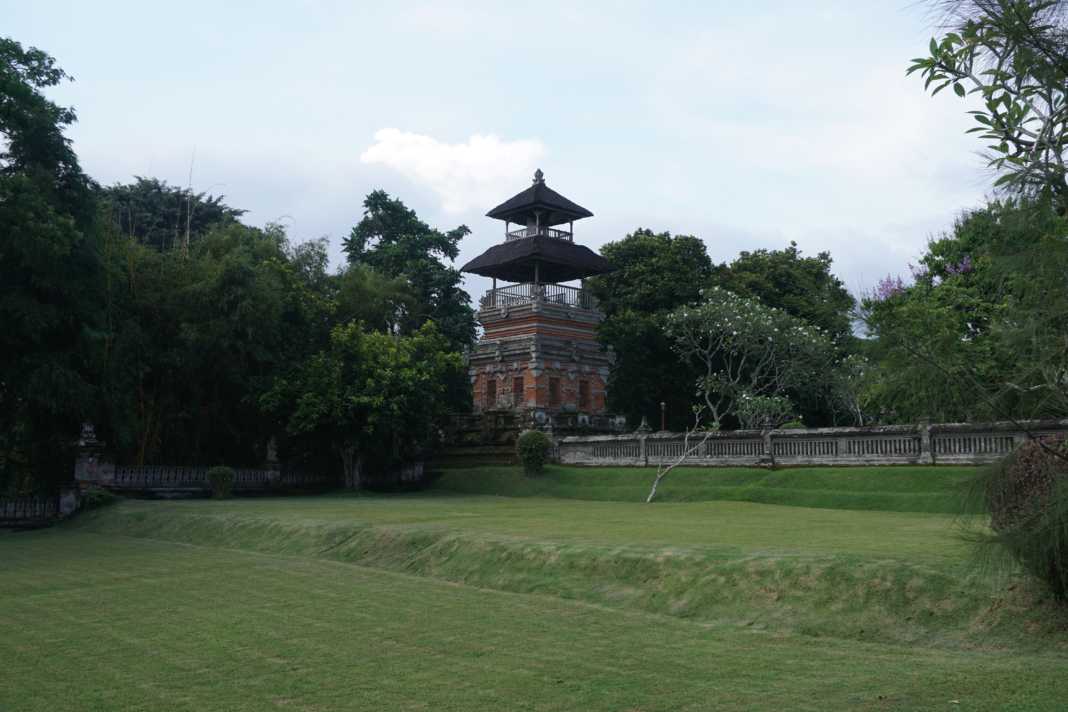 The final courtyard (4th if you’re keeping count) is the most sacred. As you see in the gallery, the gates are closed. They’re opened during ceremonies. However, you can get a glimpse inside from another focal point within the temple.

I was impressed by the architectural structure. It’s really difficult to put the emotion into words. Standing next to the massive structures while processing the fact that they’ve stood in place since the 16th-century is fascinating in itself. I can only imagine what the temples looked like in their prime with sparkling pools, now filled with algae and fish, surrounding the temple.

What you need to know before entering temples:

Ladies, if you are menstruating you cannot enter the temple (which is actually the case for most, if not all, temples).

The entrance fee is inexpensive at about 5,000 Rupiah.

Offerings and sarongs are not required. Enjoy the photo gallery!

If you want a true immersion experience, a trip to Pura Tirta Empul is a must.

Open to wellbeing and health, I was eager to submerge myself under the fresh water spring which flows into the Tukad Pakerisan River. The water was frigid!

Mind over matter. In the event there’s a spring known for therapeutic wellbeing in my proximity, count me in. Solid living, prosperity, and cognizant perspective are all in order.

In the event you are arranging an outing to Tirta Empul, know the rocky bottom is agonizing to stroll on as you remove your shoes beforehand. It is additionally tricky in a few spots because of green algae. Huge fish swim freely in the spring so don’t be frightened.