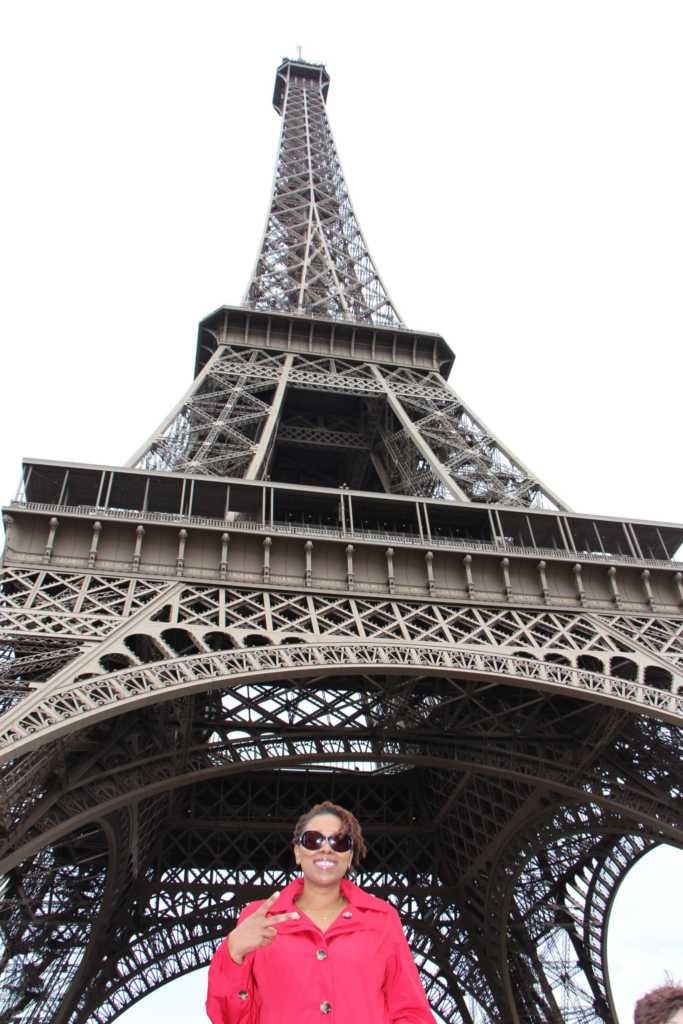 The Parisian experience is one to be had. It’s overwhelming to take in with only four days to spare, but doable! When my eyes gazed upon the statuesque architecture in Paris I was in complete awe. There are no words to describe the intricacy of it all. I’d never seen buildings so amazingly stunning.

Paris is expensive. The conversion of money always leaves me with an illusion of spending less (certain this is rarely the case) which is why I’m forever thankful for Starwood points! Using my points allowed me to stay at the W Opera hotel which is a 5-star luxury hotel for FREE. Yes, FREE!

Making the most of my 4-day layover in Paris:

Eiffel Tower – I really couldn’t wait to see the Eiffel Tower. It’s been on my list of landmarks to visit for a long time. Even the gloomy day and freezing wind couldn’t take away from the majesty of it all. And, I took the time to enjoy lunch inside Tour Eiffel 58 which is a lovely restaurant on the first level of Eiffel Tower. Once I finished, I managed to climb to the top and take in the panoramic views of Paris. I’d love to do this again at night!

River Seine cruise – A sucker for romance, an enchanting evening was underway on board a glass riverboat. The river cruise included a four-course meal, live entertainment, and amazing views of many iconic landmarks along the route. The only thing that would have made this experience better: sharing the enchantment with an amazing man. Regardless, it is not to miss.

Hop-on/Hop-off (48-hour pass) – This by far was the best investment I made in Paris given the short amount of time spent there. For $35 I secured a two-day bus pass that allowed me to hop on and off around Paris. With busses stopping every 10-15 minutes in numerous locations, I was able to plot my destinations and get around very easily using the bus in lieu of taxis. This was perfect because most of the taxi drivers did not speak English and for some reason, my Uber app continued to drain and instantly kill my battery every time I tried to request a ride. In addition to the accessibility of the bus, I was able to visit the most popular sights in Paris with a guided audio tour.

Tour sights visited while hopping on and off the bus included:

Arc de Triomphe – it was amazing to see the real Arc! Living in Brooklyn for almost a decade, I felt so close to home. There’s nothing like the real thing baby!

Champs-Elysees – it was great to stroll down the most infamous and stylish shopping strip in the world. I refrained from blowing my budget here but appreciated the experience. I did see a lovely poncho in Hermes (my first time in the boutique) but I left it behind as it was the only one and I didn’t want the one off the mannequin. I was told it was the only one the designer made and perhaps that’s the case with everything in Hermes. I do wish I’d purchased the poncho in hindsight (another time) as it was exquisite.

Louvre – my breath was literally taken away when I stepped inside the Louvre. I felt overwhelmed with fear. Even with the massiveness of it all, I felt closed in. I definitely have to go back and explore when I have more time to spend in Paris.

Paris Opera – the Opera is beyond grand and I must see a show next time! It’s located directly across from the W Hotel in a prime location.

I also saw Notre Dame, Trocadero, and Grand Palais (Winston Churchill Ave) while trekking around Paris on a rainy day.

Yes, my days in Paris were packed with sightseeing and tours and with one day left, I hopped a train to London and spent the day seeing Big Ben, the London Eye, and the London Bridge.

Finding breakfast as a vegetarian in Paris and London was a chore. As much as I love baked beans, I don’t want them for breakfast. And, I had my heart set on having some real french toast. Um, imagine my shock when I learned french toast doesn’t exist and the notion was not derived from the French at all. I was the laughing stock of the morning. The breakfast trend: English muffins, baked beans, and an assortment of meat. Take it or leave it.

With all the artsy cafes in Paris, I had no business popping my butt into Starbucks (which I have a love/hate relationship with) but I did. It was just too convenient. I managed to stay out of McDonalds and Pizza Hut. And is that KFC and Burger King? What are they doing here?!?

I wish I knew more than Bonjour and Merci. My Uber driver was a handsome young man who only spoke a lick of English. He tried his best to engage in dialogue with me in the wee hours of the morning. Whatever he said to me in French sounded romantic and inviting. Combined with his sexy smile, beautiful teeth, and overall physique, we definitely could have clicked. But, but, but, I had no clue what he was saying! He shared a photo with me of his son and played nice jazz music for our ride to the airport. The only thing I managed to understand with his limited English speaking ability was when he asked for my phone number to keep in touch. I contemplated and decided I’d never learn enough French to make this work. Sigh. If only habla espanol.

So, this is how I made the most of my 4-day layover in Paris before heading to my final destination of Greece. I can’t wait to return to Paris in the Spring!