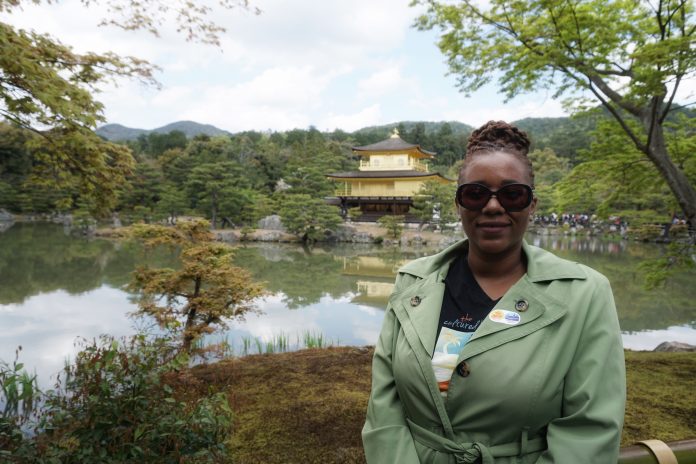 Outside of cherry blossom viewing, my solo travel to Kyoto included a flexible itinerary.

Yearning to see as much as I could, I narrowed my trip down to three key areas: Tokyo, Kyoto, and Osaka.

Kyoto used to be the capital of Japan. Now, with more than 1.5 million people, Kyoto serves as the seventh largest city in Japan.

With deep history, shrines, and temples, Kyoto made it on my list of places to visit.

The bullet train from Tokyo Station to Kyoto Station using my JR pass was straightforward. The ride quiet and scenic. I gazed out the window waiting to catch a glimpse of Mt. Fuji.

After a few hours, we pulled in quickly and quietly to Kyoto Station.

The bustling train station is full of shops, restaurants and entertainment. Grand Central Station and Penn Station combined have nothing on either Tokyo or Kyoto Station!

Once I figured out the right direction to exit, I hopped a local bus to find my cozy Airbnb. Its rush hour and the bus is running over with people who glanced at me with curiosity. What was I doing in this part of town, on a local bus, alone.

Kyoto is a quiet town in comparison to the livelier Tokyo. Things are spread apart but the public transit is easily accessible and walking is a great way to see the city.

When the next bus stopped in front of the 7 Eleven, I jumped on, paid the far, and took a window seat. I knew the bus would eventually go full circle. As long as I knew how to get back home, I was okay.

The local bus was a great way for me to see Kyoto and locals. Simply hopped off/on and explored.

My first wrong turn landed me at Kyoto University of Art & Design where I enjoyed a nice café and hot cup of mocha nearby at Birion Coffee. 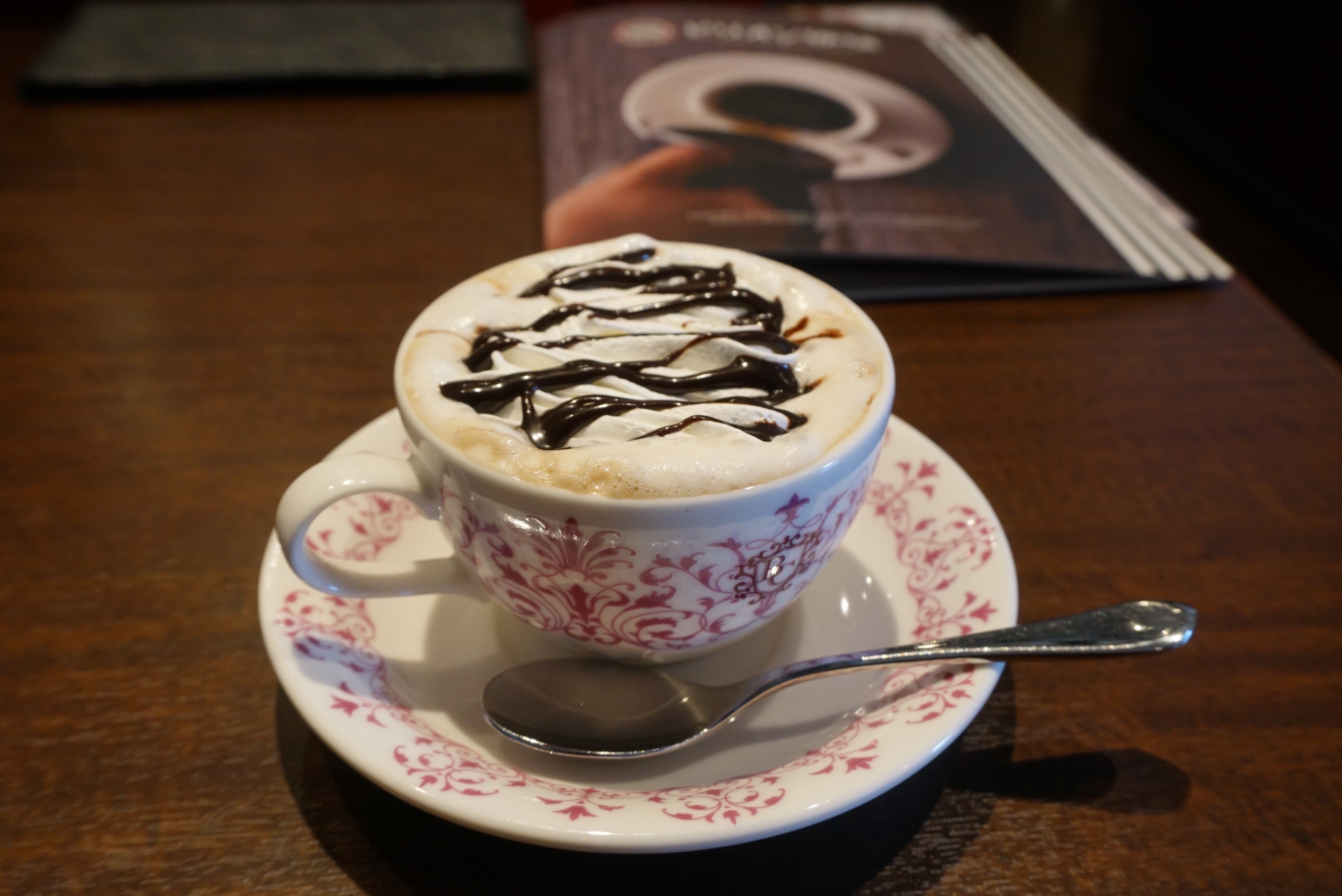 Realizing I’d gone too far, circled back and strolled down Philosopher’s Path. The stone path runs through the Higashiyama district in Kyoto. There’s a calm canal lined by hundreds of cherry trees. Since I arrived in late April, the blossoms were mostly out of sight. However, it’s still a beautiful area and if you’re in Kyoto during the right season, you can enjoy hanami (cherry blossom viewing) here. 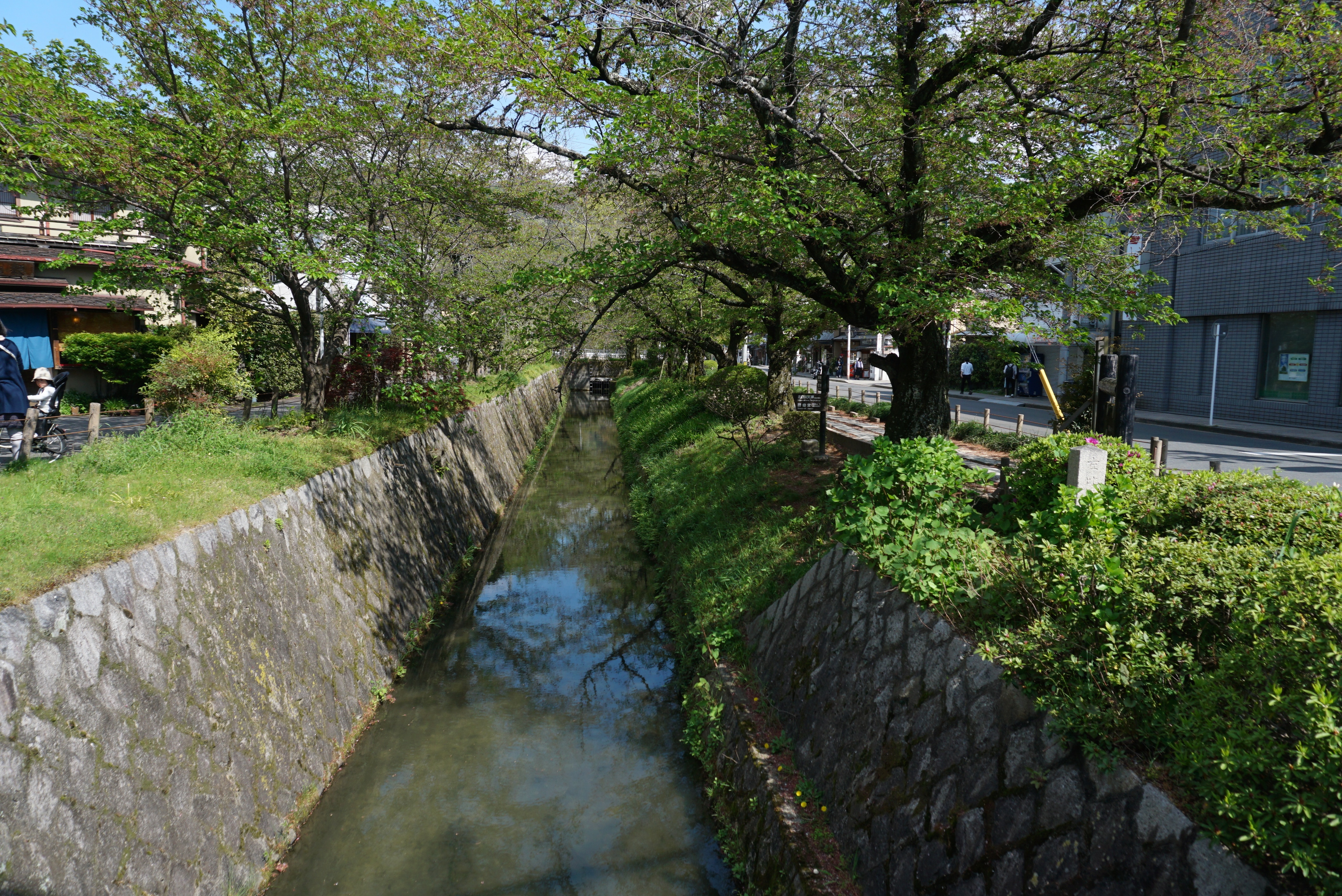 Philosopher’s Path offers tranquility. I took my time here. Thought of my vacation in Bali and my commitment to start meditating daily. Ironically, this path named after famous philosopher Nishida Kitaro who walked the route and meditated daily en route to Kyoto University.

Along Philosopher’s Path you’ll find restaurants, shops, and a number of temples and shrines.

The path led me to Ginkakuji Temple, a World Cultural Heritage Site.

Ginkakuji Temple is a Zen temple established in 1482 by the eight Muromachi Shogunate. The imperial entrance takes you along stone hedges, bamboos, and camellias before opening to an impressive garden.

Ginkakuji, the Silver Pavilion, served as a retirement villa for the Shogun. Today, it serves as a Zen temple.

Particularly in Kyoto, I noticed a number of sand gardens which are swept daily and in pristine condition. At Ginkakuji Temple, you can’t miss the massive garden known as the Sea of Silver Sand.

While the interior of the temple is not open to the public, I found joy walking around the moss garden and exploring the hills which overlook the grounds and beyond.

If you’re in Kyoto, I highly suggest you make your way over to Philosopher’s Path and Ginkakuji Temple. There are a number of ways to access. I walked to the area after hopping off the local bus (number 5) not far from Kyoto Station.

Tip: the price for admission is 500 yen.

Another World Cultural Heritage Site, The Golden Pavilion is a Zen Buddhist temple in the Rinzai Sect. Originally, the site of a villa owned by a statesman. If you can escape the crowd, go for it!

The reflecting pond casts a beautiful image of the pavilion and garden. The buildings represent the Pure Land of Buddha in this world.

The gold foil over lacquer covers upper levels. A phoenix stands on top of the shingled roof.

While the inside to most temples aren’t open to the public, you can sometimes catch a glimpse in. And, it’s gorgeous. Large rooms filled with hand paintings and intricate detail.

The grounds offer more than reflecting ponds and lands of gold. There’s a tea house built during the Edo period with bamboo pillars and a small waterfall.

If you can’t tell, Kyoto is full of intriguing castles, temples and shrines. The Nijo-jo Castle, formerly the Imperial Villa, is another World Cultural Heritage Site.

No, I didn’t plan to visit all these sites. I just couldn’t pass them by on my walks of Kyoto.

So, this is one of the few castles the public can enter. And, one of the most significant as related to the history of Japan. The first shogun ordered completion of the castle in 1603 after a long period of civil war. For more than 260 years after building, peace and prosperity covered the people and marked the longest period of stability in Japanese history.

When the Shogun was not residing in the castle, Samurai guarded the castle. Walking the grounds, stone walls and numerous hiding places are abound. This protected outsiders from breaching the castle. There two tea houses in the garden along with a pond.

The Ninomaru Garden shown below is a classic Shoin-zukuri style garden with a Horai-jima island (symbolizes paradise) and a crane island and turtle island which are metaphors for longevity. Multiple vantage points offer garden views. 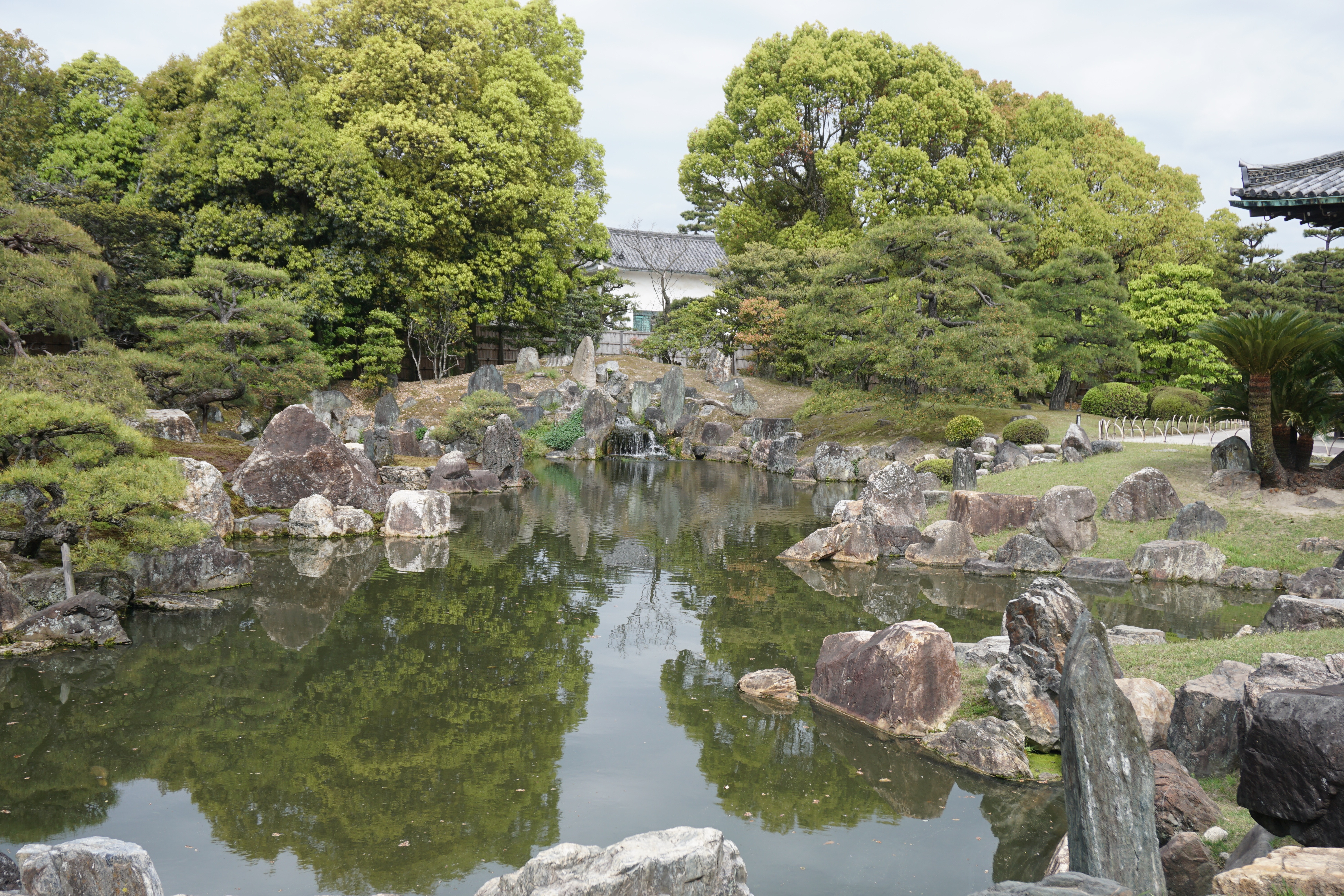 The Kara-mon Gate (shown above) stands at the entrance to the Ninomaru-goten Palace. The intricate architecture represents the highest status. The cusped gable to the front and back of the roof, cypress bark instead of copper or tile for the roofing, and four supporting pillars with pine, bamboo, and plum blossom carvings. The lions are protectors of the palace.

Ninomaru-goten Palace houses a maze of connected buildings and rooms. I couldn’t take photos inside the temple but the paintings, which are replicas, are lovely. You’ll find pine and hawk, tigers, leopards, and cherry blossoms painted with detail inside.

A few photos from my brochure: 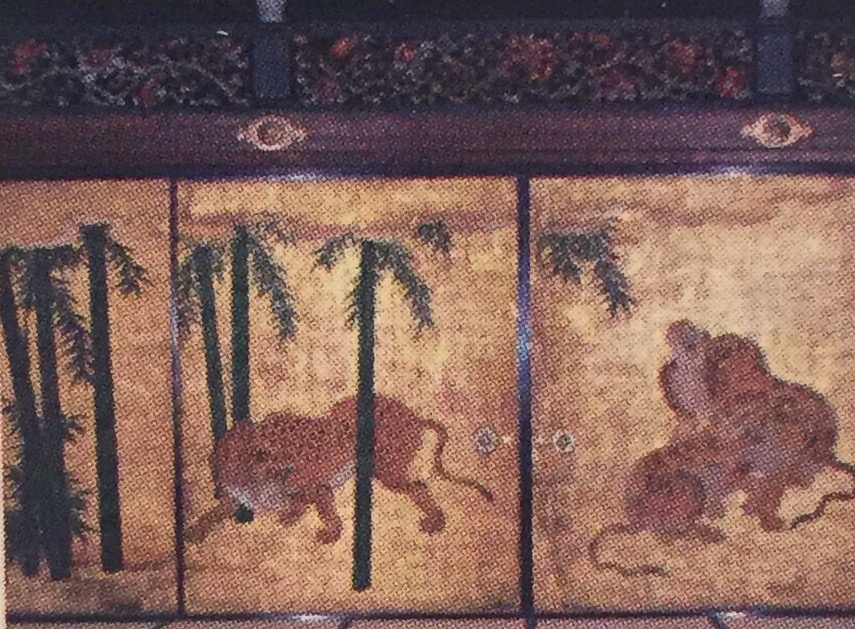 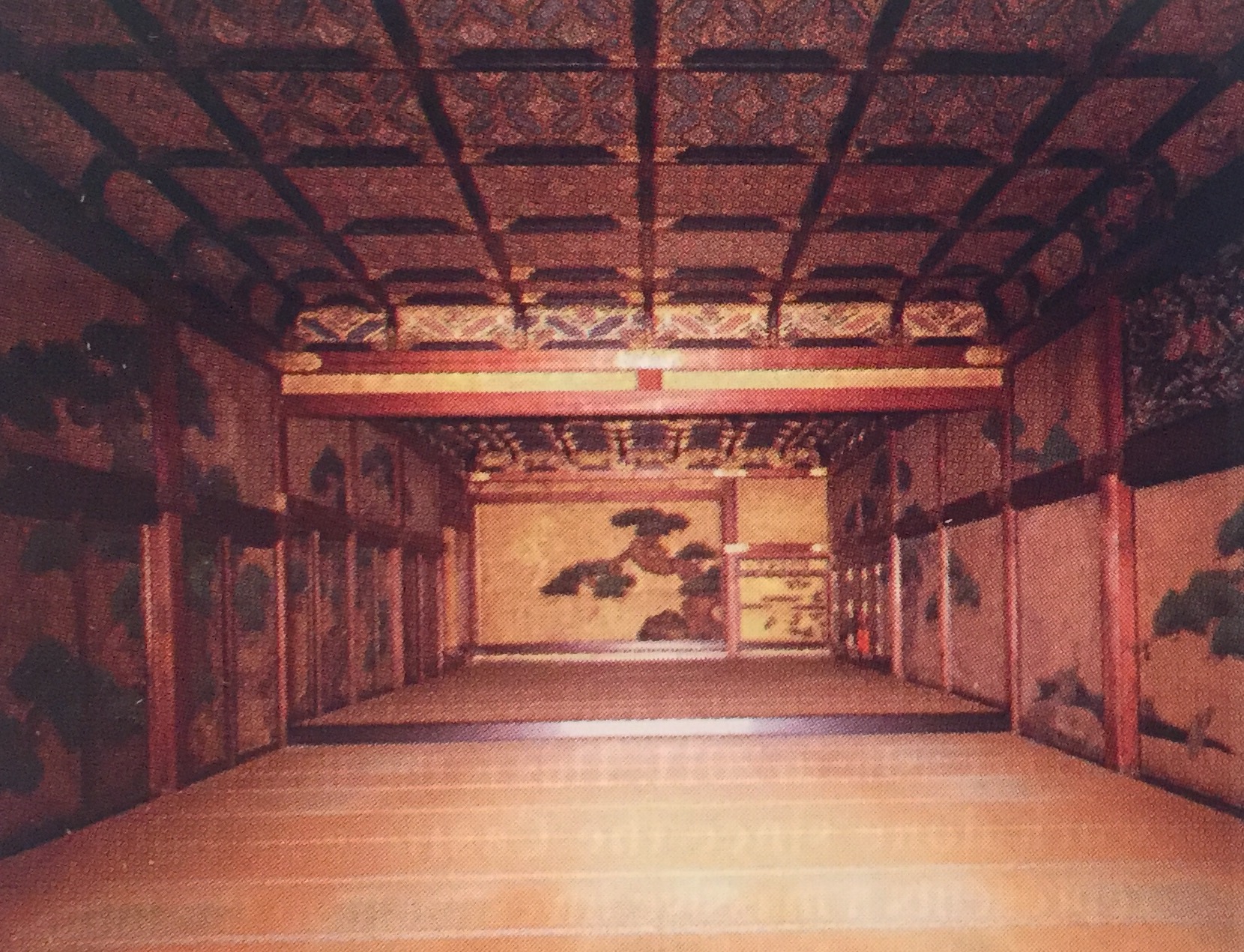 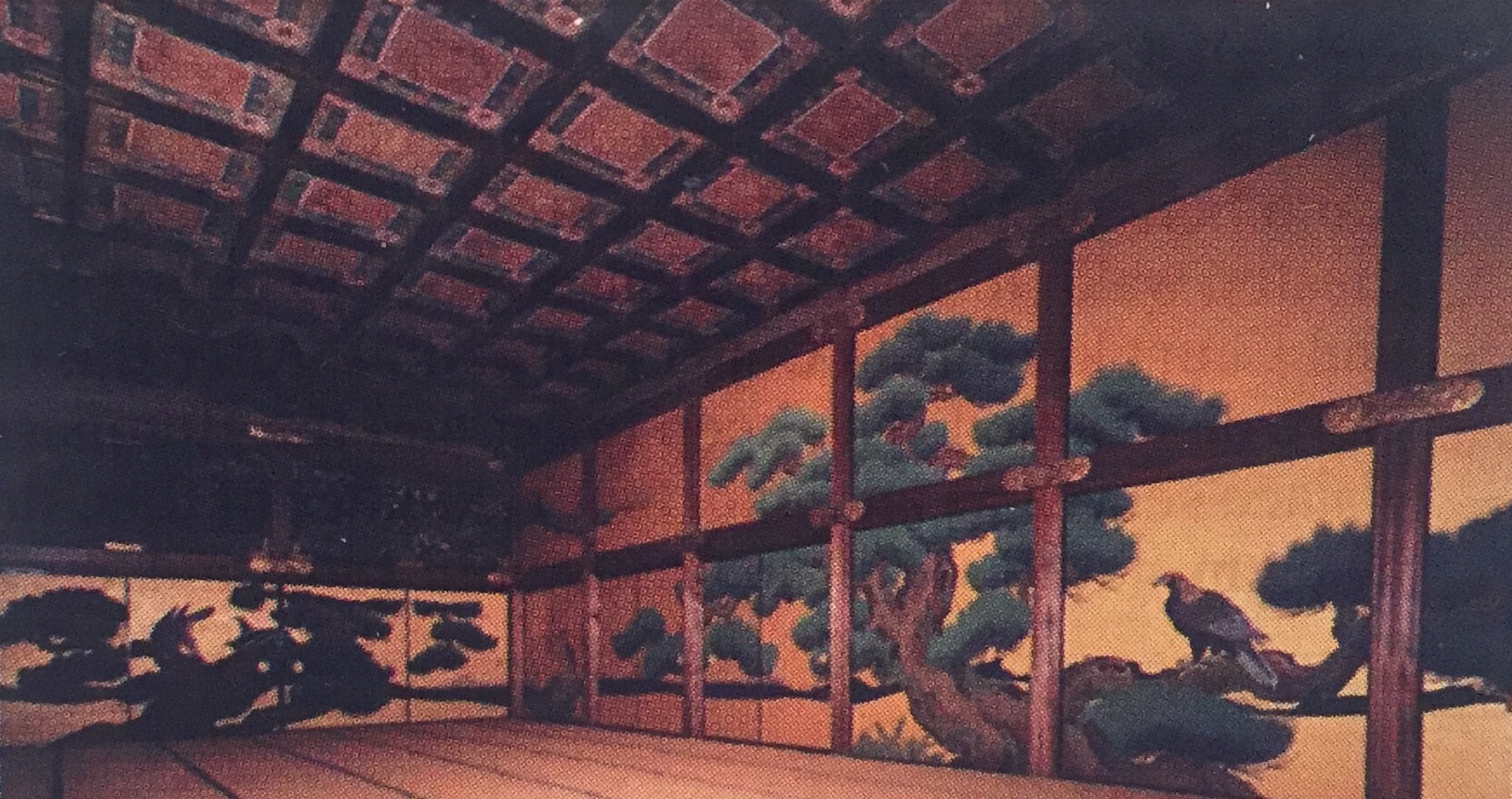 As I browsed the paintings, the strange portrayal of tigers and leopards caught my eye. Mainly because they don’t look like tigers which weren’t in Japan. So, depiction of the animals influenced by legend and tales. Positioned in the first room to express authority of the Shogun. The first thing visitors saw upon entering the palace.

There’s so many unique features of the castle. Take the floor for example. As you walk through the palace, the floorboards squeak and sound like the song of a nightingale with each step. Can you imagine the sound of birds with hundreds of people walking through the castle at any given hour!

This area known as the Nightingale Corridor supposedly alerted Samurai of intruders. With more than 33 rooms and six buildings, the Nijo-jo Castle is worth a visit while in Kyoto. If the architecture doesn’t suck you in, the more than 3,600 wall paintings should do the trick representing various eras.

Tip: The price for admission was 600 yen and is accessible by the subway via Nijo-jo mae station or the city bus. 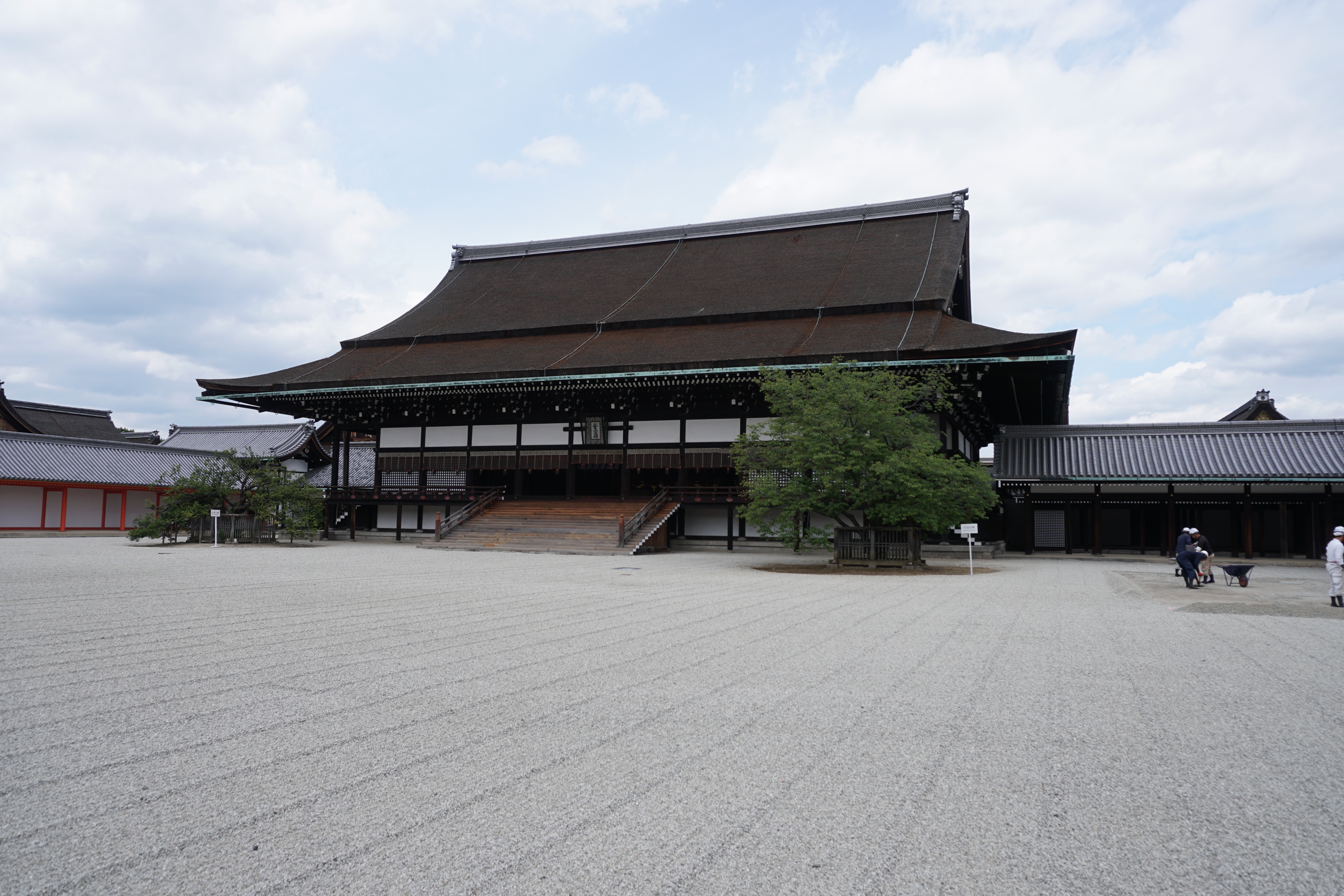 After a while, they start to look-alike. There are many similarities between the castles, palaces, and shrines. But, they all have different meanings and served different purposes and people. The Kyoto Imperial Palace was residence to Japanese emperors until the capital moved to Tokyo in 1869.

There’s a common denominator amongst the various palaces. All restored due to fire or earthquakes over centuries.

Access Kyoto Imperial Palace by local bus. Take the local bus and get off at Karasuma-Imadegawa stop. Or, take the Karasuma line and jump off at Imadegawa Station.

At this point, I really hadn’t planned to see anymore palaces, castles, or shrines!

However, hunting for Udon noodle led me straight to Fushimi Inari Shrine and ultimately my favorite. The Shinto shrine famous for thousands of vermillion torii gates. 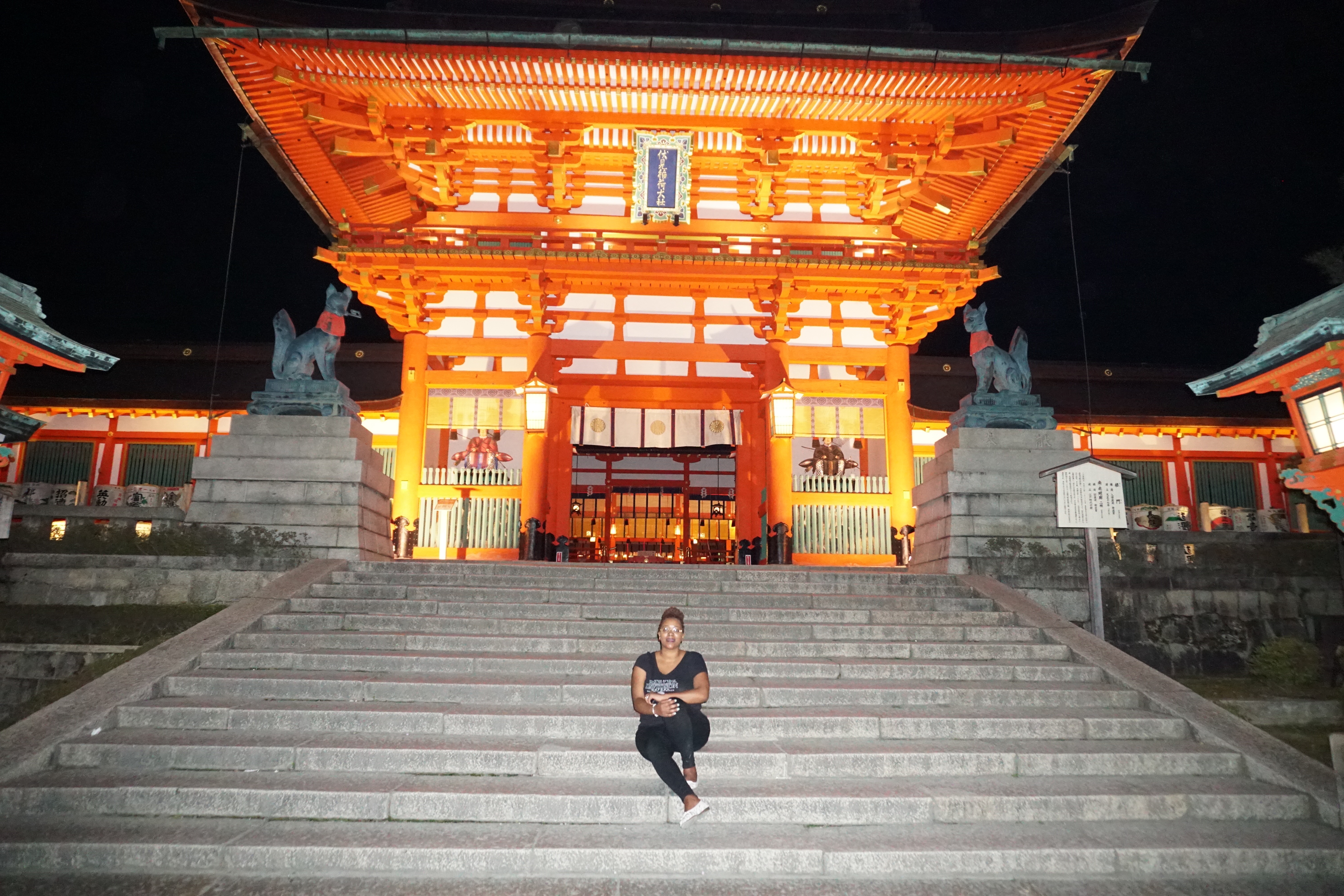 Y’all, I had the nerve to visit this shrine at night (which was beautiful) and densely occupied. The trail of gates lead into a wooded forest (yes, I looked out for Jason) and sacred Mount Inari.

Check me out standing in Senbon Torii (thousands of torii gates). Honestly, I didn’t linger back here alone too long. Other groups came and went. Y’all, I stepped off the beaten path and quickly got back on!

Torii gates donated by companies and individuals. Similar to the Sake in my photo gallery. Each has the donor’s name inscribed. 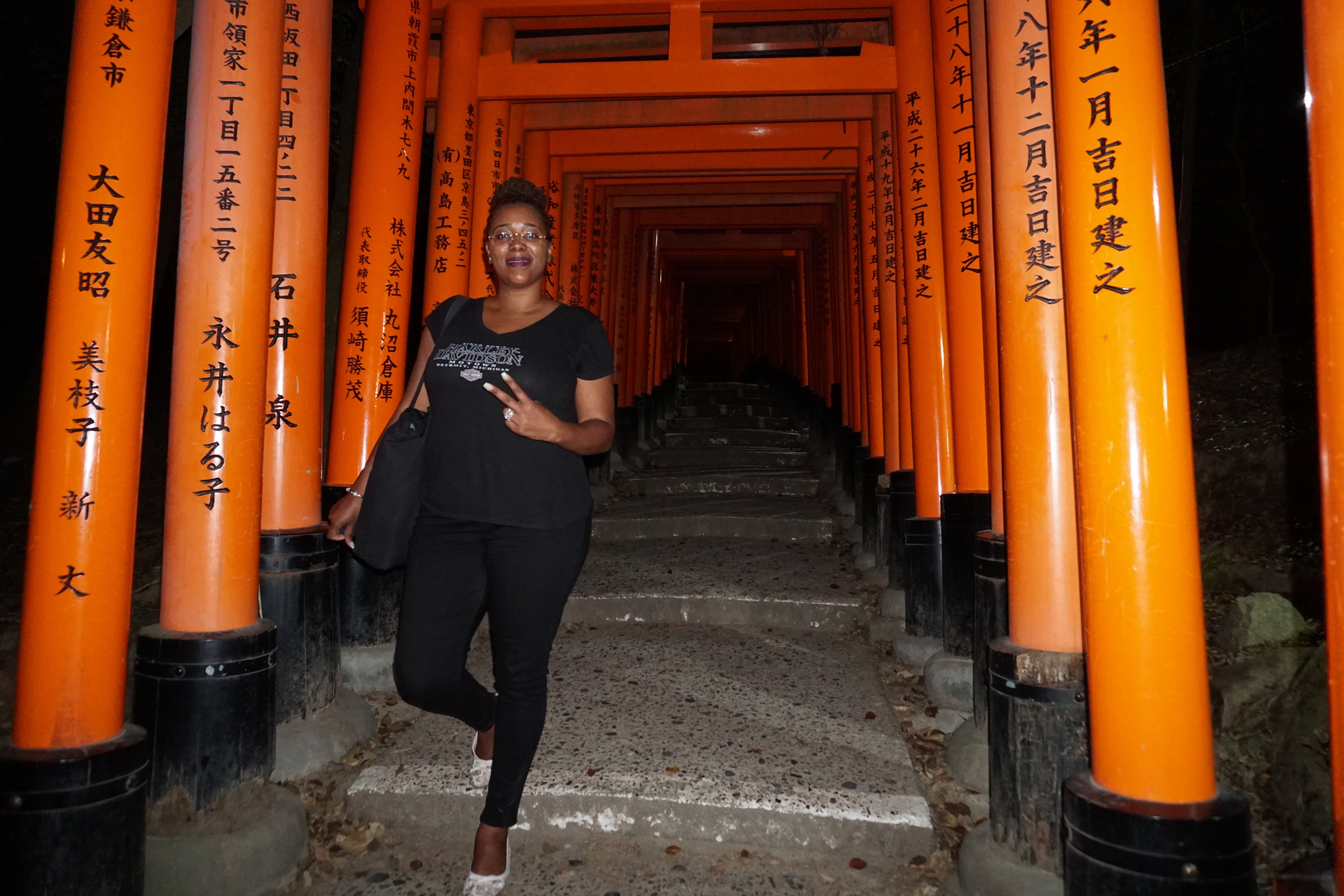 Because it was dark as hello and I was by myself, I didn’t make the 3 hour hike to the mountain. If you go and make it, please send me pictures!

When I return to Kyoto, I’ll visit during the daytime and explore the various restaurants that line the path.

What’s so memorable to me about this gem is I almost didn’t find it. Got lost. Called it quits that day. But, the universe led me back in this direction another day as I searched for Kendonya. This handmade Udon noodle restaurant in Kyoto is known for the freshest noodle. If you’re near Fushimi Inari Shrine, grab yourself some delicious Udon noodles at Kendonya.

7 Eleven’s are the bomb!

Fully equipped with full-course healthy meals. There was a 7 Eleven a block from my Airbnb. I walked over every evening for late night snacks. The Pringles (which I rarely eat) loaded with flavor. Our food quality doesn’t compare.

Reflecting, I enjoyed Kyoto. The town has a chill nightlife and jazz music scene. Good eats and nice people. I felt safe walking around town and even took the Hankyu Line to Osaka for a day of sightseeing.

No, I didn’t see any other persons of color (and that’s okay) in Kyoto but that didn’t hinder my visit. There were a lot of American tourists and every local encountered was more than helpful and courteous.

Next time, I’ll get a jumpstart on travels to Japan in time for cherry blossom season.

Have you been to Kyoto?