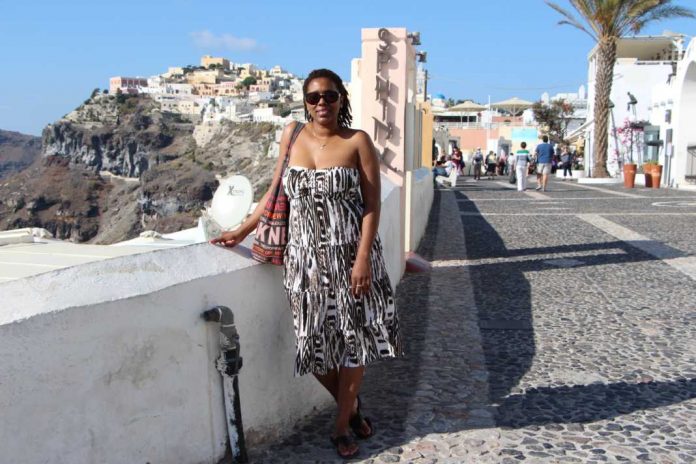 Sunsets, strolling, and cheese! My fondest memories of Santorini.

Roaming free through the towns of Santorini resulted in one of the most rejuvenating experiences of all times. Having traveled across land and sea to get here, the arrival: pure bliss. My first encounter at the port from Mykonos was with a handsome gent from New Zealand. A sociable guy who insisted I add New Zealand to my bucket list (did that). Let me just say, haven’t stopped thinking about New Zealand since!

A rocky road, the ride up the massive (active) volcano in an oversized charter bus was mesmerizing (view) and frightening (sharp twisting turns). In fact, I’m not certain how the mega bus made it around any of the turns not to mention in oncoming traffic. Being elevated in the sky and literally on the edge, I prayed Jesus had the wheel!

While Santorini itself is well known, many don’t realize it is actually a collection of islands inside of a beautiful volcanic crater which is commonly known as the Caldera. I spent the majority of my time on the islands of Thíra and Nea Kaméni (snorkeling) but there are several more in this unique blend including Thirassiá, Asproníssi, and Palea.

The lovely town of Oia was adjacent to my hotel, a short walk north. Walking on top of this cliff was such an adrenaline rush. Made me feel on top of the world while touring Caldera’s “eyebrow” (the balcony of Santorini). Oia is full of blue-domed chapels, restaurants, and dainty shops. It was in Oia where I saw my first fish spa.

People actually dip their feet into a tank and allow small fish to eat the dead skin off as they suck away on their feet. Apparently, this concept was made popular by one of the reality TV shows. Definitely not my cup of tea but heard it’s wonderful. In fact, my new Haitian friends from Miami that I met on the yacht were inside. Earlier, the guy insisted he would NOT partake in the fish pedicure but his new wife had her way and it became quite the joke when we strolled by the fish pedi spa and caught them in there. He chuckled and said it wasn’t too bad after all.

There are many great boutique shops, bars, and restaurants in the town of Oia. You’ll also get a great view from here.

The other hot spot is the town of Fira which is the nucleus for all things coming and going. In Fira, you’ll find even more shops. Its artistic buildings make up the colorful backdrop that is the portrait of Santorini.

Popped inside Rastoni Restaurant which is in the heart of Fira. The food was delicious as was my cocktail but nothing beats the view (see below). My highlight though was the guy sitting next to me who poured his marijuana out on the table, rolled it up, and smoked it!

Meanwhile, I’m at my table salivating over the cheese. It’s one of my addictions (only have a few) and this was the best ever had. I don’t know what they’re doing to the goats in Greece but I wish I could find out. I’d certainly invest in a goat for the backyard if only I knew where to begin. The cheese I’m told was prepared using a special process called hloró tyrí and all I know is it lingered on my tongue in a way that was entirely too intimate. Oh my goodness, if only I could import some of that cheese and wine! My parties would never be the same.

Rent a car, motorbike, or catch the local bus. I actually took the bus several times when I wanted to make my way over to Fira and some of the other distant towns. The streets are extremely narrow for the large charter buses that somehow manage to navigate the hills. The local bus and the private buses resemble each other so it can be a challenge to figure out which is which. Some of the bus stops aren’t clearly marked either. I found standing on the side of the street and flagging them down worked well. If it was the local bus it’d stop. If not, he’d make a gesture indicating to catch the next one. Taxis were readily available too.

Thankfully, everything I really needed was at my hotel and if I wanted to venture out, the sweet little town of Oia was there. I felt safe strolling around the town alone at night. It really was a refreshing affair.

The only downfall, if there is one, is accessing the beach. You must make your way down the mountain in order to enjoy the warm waters of the Aegean Sea. The calming waters and most beautiful sunset in the world make it absolutely worth it!