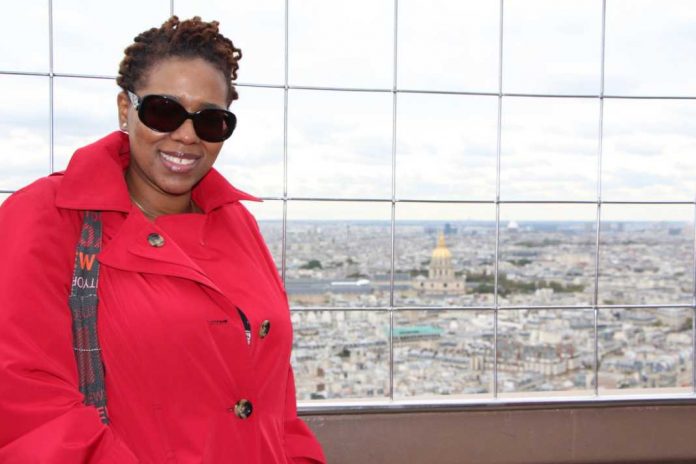 From New York to Paris!

It didn’t matter that we’d flown all night, lacked sleep, and couldn’t check into our rooms. The W was not accommodating and the whenever, wherever had gone out the window. They were too busy name dropping at the front desk the celebrities who hadn’t checked out yet during Fashion Week (the reason my room was unavailable). Half zombie, half vampire, I chilled in the lounge for a few hours with other tired travelers. Gazing out the window, I’d been up 24 hours straight. As much as I wanted to delve into Paris, I needed a nap first.

Fast forward, and we’re on top of the world witnessing Paris and all she had to offer from top of the Eiffel Tower. The iconic landmark overflowed with spectators while we dined inside of Tour Eiffel 58. The food wasn’t that great but being inside the Eiffel Tower and inhaling the impressive view diminished the lack of taste.

A gloomy day couldn’t even take away the thrill of it all. I was moving on up! Pausing as usual to chase my breath. Moving over to let those in a rush pass. Exhaustion would not get the best of me. Determined to make it to the top, I carried on. And once there, saw what was meant to see.

The history lesson from tour came in handy:

The Eiffel Tower wasn’t always the color it is now. It used to be yellow and a host of other colors. Every few years she (never knew it was a she) gets repainted. If I remember correctly, it takes approximately 60 tons of paint to keep her fresh.

Surprised to learn the tower was the tallest structure in the world for a long time and lost its claim to fame when along came the Chrysler Building and the Empire State Building. Living in New York and staring directly at both buildings daily for more than a decade, it’s hard to believe 1) how high in the sky I am, and 2), the Eiffel Tower doesn’t look so tall from the ground. In further thought, not sure how I even climbed all those steps! When the fire marshal comes to conduct our safety protocols at work, we complained about having to take the stairs four short flights up/down. I managed to climb at least 1,200 of the 1,710 steps of the tower. Won’t ever complain again. Hump!

Eiffel Tower was almost deconstructed. Say what! When first erected, the Parisians didn’t like her. Referred to her as a monstrosity. Eventually saved by the addition of antennas which now broadcast television and radio signals worldwide.

Taking in the panoramic views, a building with a gold dome caught my eye. You can see it in the background of my photo. It is the Dôme des Invalides and contains the tomb of Napoleon I.

Not sure how the Eiffel Tower became synonymous with romance (Hollywood may be to blame) but love is always in the air.

I can’t wait to return to Paris in the spring.

Have you been to the Eiffel Tower in Paris? Tell me about your experience?